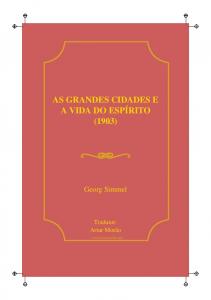 “The deepest problems of modern life flow from the attempt of the individual to maintain the independence and individuality of his existence against the sovereign powers of society, against the weight of the historical heritage and the external culture and technique of life. This antagonism represents the most modern form of the conflict which primitive man must carry on with nature for his own bodily existence. The eighteenth century may have called for liberation from all the ties which grew up historically in politics, in religion, in morality and in economics in order to permit the original natural virtue of man, which is equal in everyone, to develop without inhibition; the nineteenth century may have sought to promote, in addition to man’s freedom, his individuality (which is connected with the division of labour) and his achievements which make him unique and indispensable but which at the same time make him so much the more dependent on the complementary activity of others; Nietzsche may have seen the relentless struggle of the individual as the prerequisite for his full development, while socialism found the same thing in the suppression of all competition ± but in each of these the same fundamental motive was at work, namely the resistance of the individual to being levelled, swallowed up in the social-technological mechanism.” | Read and Download the Complete Essay