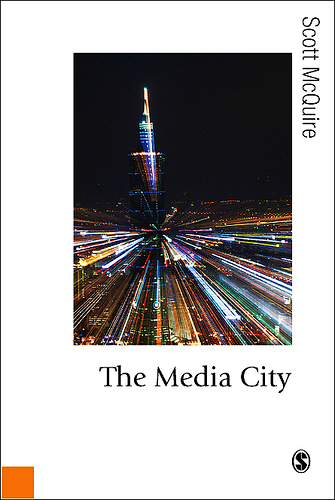 The book The Media City: Media, Architecture and Urban Space, written by Scott McQuire, aims to reflect about “significant changes are occurring in the spaces and rhythms of contemporary cities and in the social functioning of media. This book argues that the redefinition of urban space by mobile, instantaneous and pervasive media is producing a distinctive mode of social experience.

Media are no longer separate from the city. Instead the proliferation of spatialized media platforms has produced a media-architecture complex – the media city. Offering critical and historical analysis at the deepest levels, The Media City links the formation of the modern city to the development of modern image technologies and outlines a new genealogy for assessing contemporary developments such as digital networks and digital architecture, web cams and public screens, surveillance society and reality television.

Wide-ranging and thoughtfully illustrated, it intersects disciplines and connects phenomena which are too often left isolated from each other to propose a new way of understanding public and private space and social life in contemporary cities”.