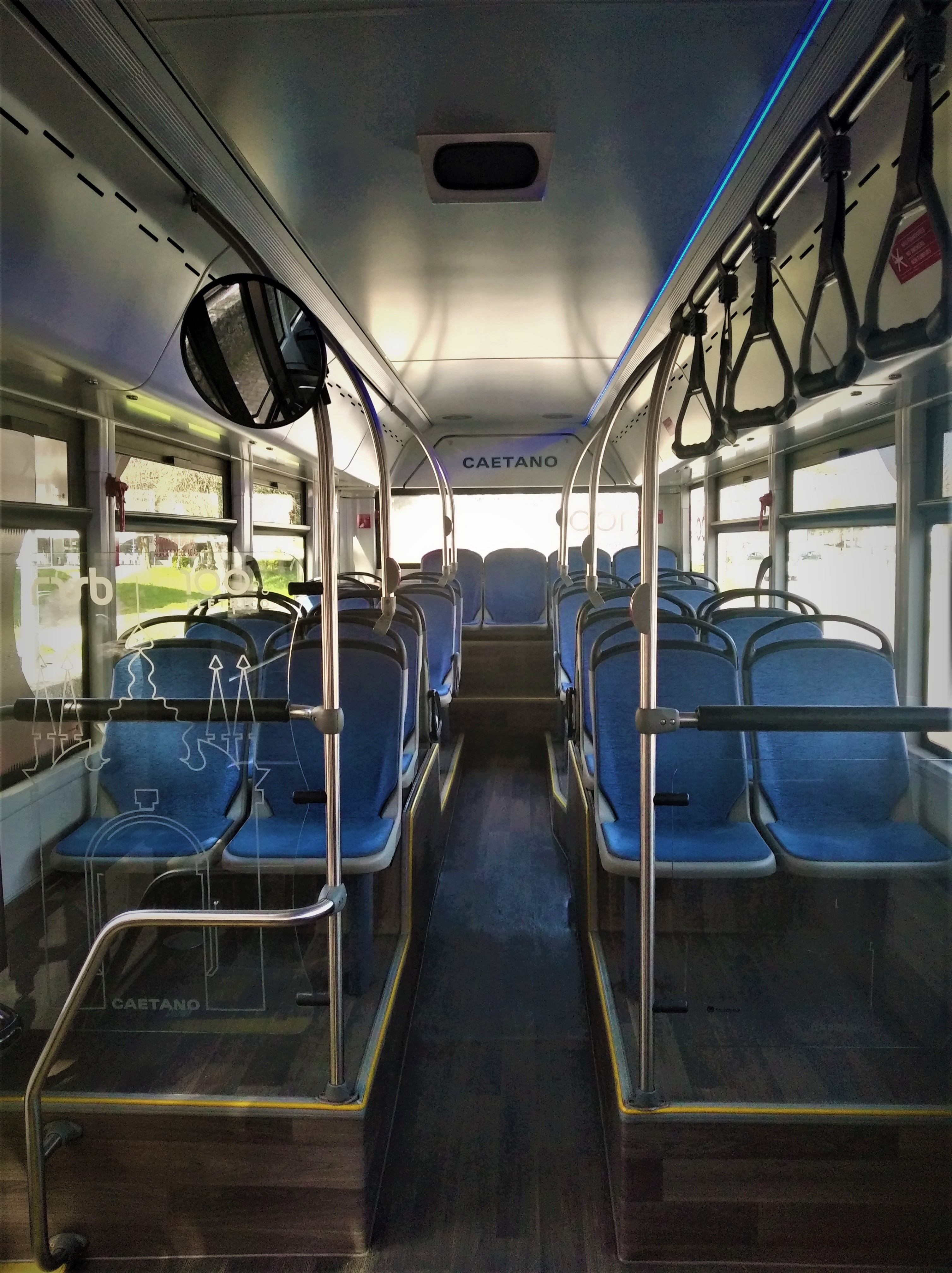 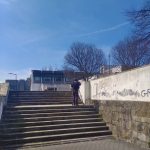 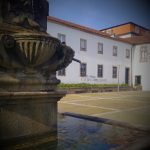 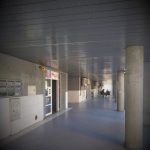 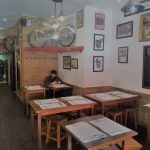 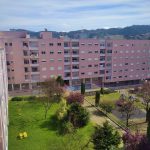 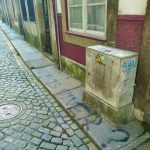 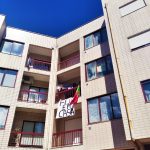 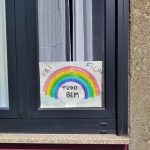 A look that has become introspective in Gualtar

Less than a month ago, Gualtar’s routine changed. Fear and tension, spread by the advancement of the new Coronavirus around the world, have transformed people’s lives. With the closure of the building that gives rise to the Institute of Social Sciences of the University of Minho, reported by the television network on March 7, the population saw social isolation ever closer and this became more and more noticeable. On a Monday, the day on which school activities normally resume after the weekends, the Gualtar campus was empty.

“At Praceta Amândio Ferreira Pinto, silence. The cold wind and the sun announced that spring was near, the tree leaves and flowers were being born again. The cafes around the square were open, but operated with reduced movement. The eyes of the people who tried to continue with their routines reveal their fear, but the smile of an attendant at Café Snack-Bar Três Corações showed tranquility. You can hear the bell of the Parish of São Miguel and the screams of children who are still playing in the schoolyard of the region”. While the news already discussed the shutdown of schools, children continued to play and, even if unconsciously, tried to maintain a healthy life routine in collective spaces. “Walking along the N103, the road that leads to the University of Minho, there were few people. The movement of students, researchers and professors coming and going to the University has reduced and there are almost no more people occupying public spaces. What will happen to these spaces? And with people? The answer seems to me uncertain” (excerpts from field diary, March 10, 2020).

On the stairways that leads to the University of Minho, located next to the Gualtar I and II bus stops, only the press could be seen. A cameraman was taking pictures of an empty educational institution, paralyzed by the threat of a pandemic that had yet to be confirmed. “It was 11:00 am and some buses passed empty. Upon entering one of them, the void became clearer. Instead of paying for the trip in cash, I opted for the card. I had already read recommendations saying that, at this point, contact with money should be reduced by the risk of contagion. We passed three stops, and the bus was still empty. The windows were open. I saw that some people started to get on the bus. A lady was carrying a flower, a symbol of life, but in her eyes the expression was uncertain. The path taken to the North Regional Health Administration building, located at Largo Paulo Osório, was marked by silence. Few people spoke and, inside the building, a reduced number of passwords were distributed by the security guard, who explained the need to avoid crowding at the site. The service was slow. Some people waited inside the building, while others preferred to stay outside, away, enjoying the sun on the street on a cold day. Back inside, people using the gel alcohol made available by the institution constantly, doors open and the sound of coughs. It was possible to hear people complaining, talking about the fear of not being able to get care on the spot, as they did not want to return on another date to regularize their numbers of users. Angolans, brazilians and portugueses. The variations of the portuguese language broke the silence in the place. The public space dedicated to public health remained occupied according to its functionality, heterogeneously, even if on a small scale” (excerpt from field diary, March 10, 2020).

The World Health Organization (WHO) declares a pandemic in the face of the new Coronavirus and the change in classification obliges countries to take preventive actions to combat Covid-19. It is too early to know the effects of this on the entire planet, restaurants and cafes have remained open. Tasquinha Bracarense, meeting place for many students, researchers and professors at the University of Minho to have lunch, was empty at 12:00 pm. This space, which was always full at this time, was very empty. The sensation was strange. Only five customers. The famous “Street of bars”, frequented by UMinho students, was also empty. Just a table outside, occupied by two people who were talking. “What would this university scenario look like from then on? And what about the transformations brought about by the ephemeral occupation of these urban sites, previously so heterogeneous? These questions mark the beginning of a quarantine and the beginning of new ways to move and occupy” (excerpt from field diary, 11 March 2020).

The social and cultural practices of contemporary societies have changed and humans are trying to adapt to social isolation. The academic community, the Gualtar region, the municipality of Braga and Portugal saw the need for reclusion and adaptation. With schools closed, the movement of children and young people through the streets of Gualtar has reduced. People try to exercise on balconies and terraces. “In the square, for a few days, there was a Sanitary Applause. Some people went out at the windows and balconies at 10:00 pm for three consecutive days to applaud the healthcare professionals who worked tirelessly to save lives. After three days, silence reigned in the parish” (excerpt from field diary, March 15, 2020). Some people walk the streets alone with their dogs, others still try to maintain the same routine, as some old-aged people who are in corners and in the door of shops that still remain open. “Flags of Portugal are being hung on windows and balconies, as well as children’s drawings. We see rainbow drawings and messages saying that everything will be fine. Children ask for faith and hope, while spring brings the sun and exposes an increasingly beautiful nature” (excerpt from field diary, March 31, 2020).

When proposing the concept of “urban heterotopies”, Michel Foucault (2001) explained about the conception of History, which has stagnated over the centuries, and the need to think about rupture phenomena, mainly focused on “time and space”. Thinking about these phenomena is a way of recognizing, within history, different types of durations, reinforced by heterogeneity. If these durations allow individuals to occupy different spaces and times, in different ways, we can speak of “multiple durations”. Social isolation caused public spaces to become empty, but resignified the domestic space. The Coronavirus pandemic showed that the transformations of “spaces and times” do not stop. The house is now also an office, classroom, religious worship space and gymnasium. “On weekends, silence gives way to music. Some laughter, conversation and smiles can be heard at Praceta Amândio Ferreira Pinto. And even if the pandemic continues to grow and make thousands of people sick around the world, hope grows and becomes noticeable in the parish of Gualtar, as does Spring, a season that announces a time of life and transformation” (excerpt from a field diary, April 1, 2020).

The “multiple durations” intertwine and generate increasingly clear changes. The occupation of spaces, previously defined by geographic location, mainly of places that have remained stable over time, such as squares, churches and other institutions, has given way to changing forms of occupation, scattered in different places (houses), used in multiple ways (Martins, 2002). The positioning of space, previously defined by location, is now “defined by neighborhood relations, between points or elements”, and its concept is becoming more and more comprehensive than the demographic conception can propose (Foucault, 2001, p. 412). The concept of space is more comprehensive than the demographic concept can propose. “We are at a time when space is offered to us in the form of positioning relationships” (Foucault, 2001, p. 413). The concern to portray empty places in the Gualtar region gave rise to the concern to observe the transformations experienced by societies in this moment of social isolation and combating Covid-19, which show how the domestic space is increasingly heterogeneous, full of motivations, desires and perceptions that are directly related to our subjectivities.