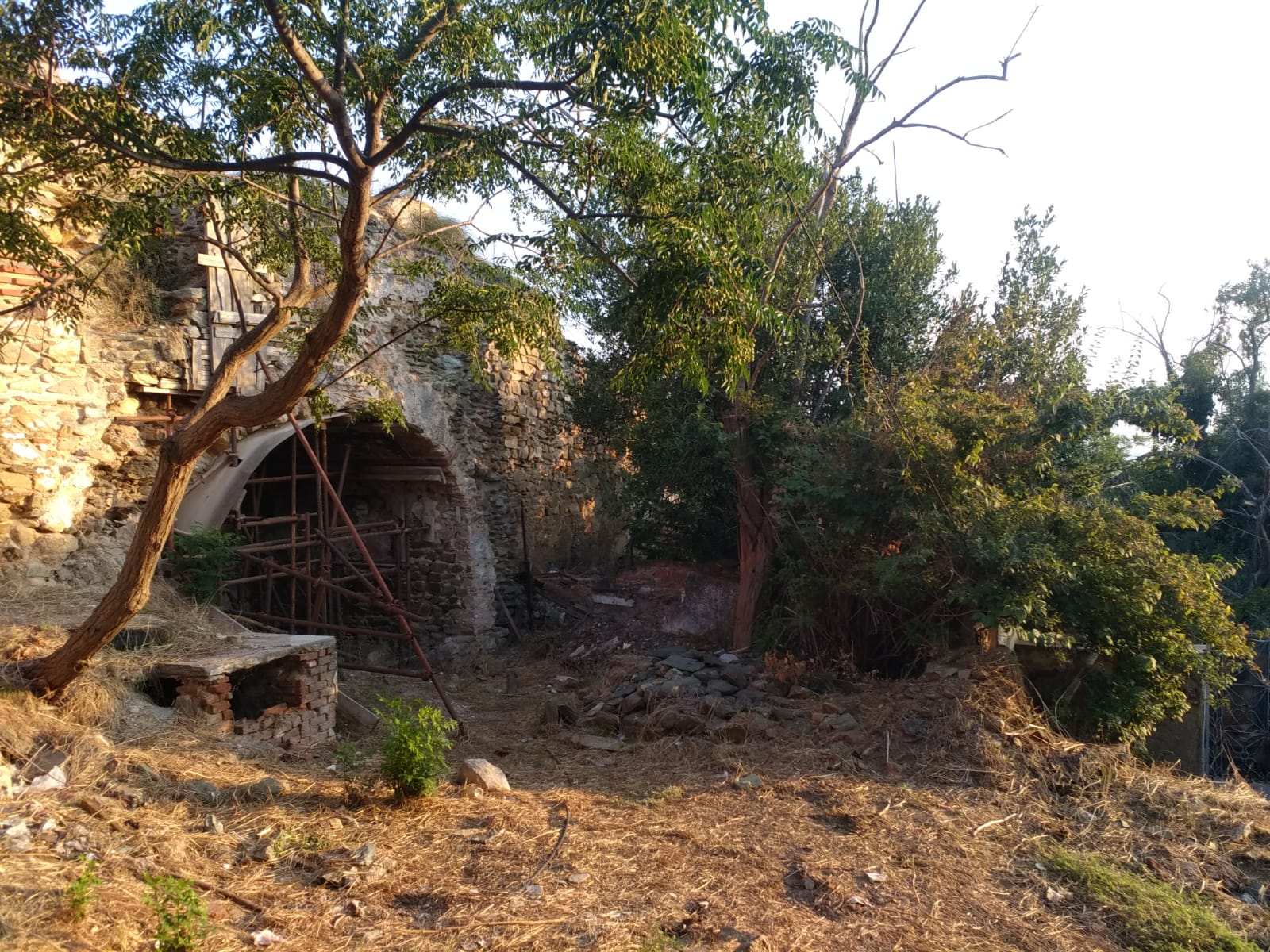 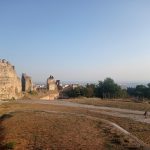 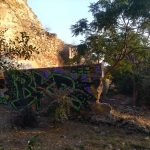 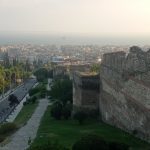 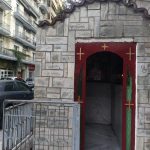 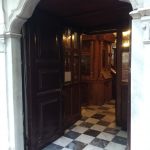 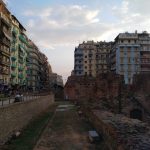 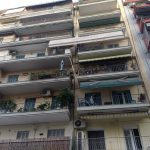 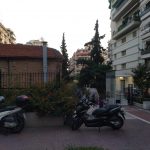 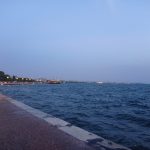 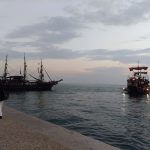 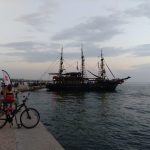 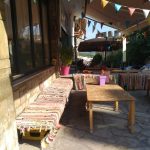 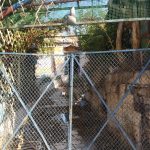 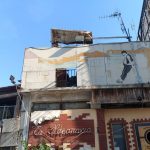 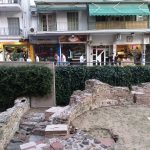 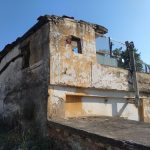 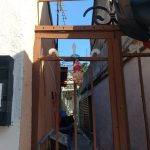 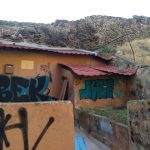 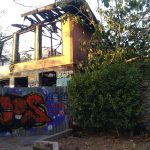 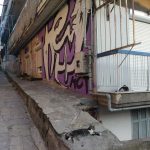 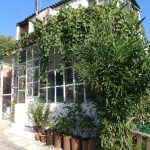 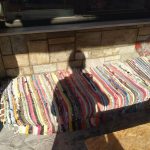 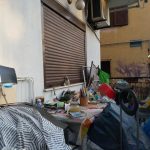 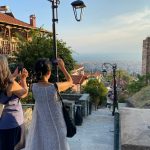 Upon arrival in Thessaloniki in the late afternoon of August 30, my first impressions are permeated by the stifling, stuffy, dusty air and the brown tones of the views that are parading before my eyes in a monotonous travelling mode on the way from the airport to the ABC Hotel (which I hope to find elevated and located in a traffic circle, considering the discouraging photo on the booking website). The taxi driver, wearing a mask, has all four windows open and the radio on high. On roadside signs or commercial store signs, the Greek alphabet accentuates the passage to a new territory, both physical and imaginary (Mons, 1998). It is still on the way to the hotel that the balconies of the buildings catch my attention. Not only because I see them everywhere, but also because you can see that they are true extensions of the house, sometimes furnished, sometimes occupied by all kinds of objects, sometimes covered with awnings. The scenery slightly reminds me of the urban landscape of Barcelona, or even of the Italian Adriatic coast, making me think that the hot weather certainly justifies the frequency and use of the balconies, leading to their transformation into outdoor rooms. The next day, walking through downtown, I would verify this first impression by observing residents sitting on their balconies. I particularly remember a woman smoking a regretful cigarette, with the expression of someone sitting in the box of a concert hall, watching the lively bustle of the street.

Thessaloniki is a city reborn after its almost complete destruction. Between 1900 and the 1950s, the city underwent several redevelopment plans after consecutive wars and fires. The buildings give us a sense of a multiplicity of languages, reminding us of the city’s historical heritage. The layout of the streets, in turn, is regular and designed based on a planned square of the early twentieth century, of French influence. The main streets, in the form of wide avenues, are busy and the automobile traffic is noisy and unstoppable. Miraculously, Ottoman churches have survived everywhere, rounded in shape and made, it seems, of small bricks. Belonging to Macedonia, Thessaloniki is an expression of a visible meeting of cultures, including Jewish and other contiguous cultures, as well as Roman, Byzantine or post-Byzantine traces. At each step it is possible to stumble upon a ruin or be surprised by a monument, in some cases reconstructed. In his Arcades Project (Das Passagen-Werk), Benjamin had already discussed the ambiguous cohabitation, in the great metropolises of the time, of the past with the present, of the archaic with the modern, manifested in architecture, but also in the multiple forms of expression of material culture. The collector, a figure advanced by Benjamin as a metaphor of the semi-detached individual of modernity, similar to the flâneur, has the vocation of fighting against the apparent disorder and dispersion of reality, imposing on it the sense of connections and affinities that the exercise of combination, catapulted by detailed observation, mobilizes. Thessaloniki appeals, precisely, to such an experience of reconstitution of meaning that hides beyond the apparent haussmanization effect or the impact of apparent transparency that the new layout makes more evident. What form can the topographic and mnemonic atlas of Thessaloniki take? How to draw the image of the city (Lynch, 1960) as seen by those who get lost in it and/or try to orient themselves? What kind of uses are given to public space?

On one of the pedestrian streets, perpendicular to the port, and one of the busiest, it is not uncommon to see young people on skateboards in the vicinity or even on the floor of the ruins, which seem to blend in with the more modern buildings, as well as, for example, rag rugs on the walls, serving as markers, in the manner of Goffman (1971), of the “personal space” that is used to have a drink or to chat, among friends or neighbours. It is also not difficult to find chairs, brought from home to the street. Life in the public space, in that street as throughout the city, is particularly busy. The commerce is varied, with fruit stores, pizzerias, and stores selling all kinds of food, including Turkish food (kebab), with a counter facing the street. Buying food, eating along the way or sitting on the go anywhere, is a common practice. In Thessaloniki, lunch can extend into the 2.00 or even 3.00 p.m of the afternoon and dinner into 10.00 p.m. Late at night, the temperature does not cool down and the movement in the streets continues as if there were no gates over the general entertainment. In the port, some gawk people enjoy sitting or parading around, body to body with the Mediterranean. In the sea, which is almost still except for the odd rough swell, two simulacrum boats, imitating archaic models, wait for tourists. I see that on one of them passengers are in a frieze, hanging from a sort of side fence. They are excited and ready for the tour. It can be heard the sound of very loud disco music, which seems to be part of the entertainment package. Far away, some ships can be seen. I take one or another picture, enchanted by the end-of-day light that seems to give the view the diffuse tones and mysterious atmosphere of a real Turner. On the promenade that follows the outline of the port, street performances are improvised, from music to traditional dance.

To the wide view from the balcony of my hotel room, on one of the upper floors, faced with a regular and apparently mysterious layout, the pictures of everyday life that the plunge into the streets and squares allows one to experience prevail. The power of looking from above seems to compete with the power of discovering other (in)coherences, perceived from within, from inside the body of the city. Benjamin (2003) had already alerted to the alternation between these two types of domination over space, which have different effects on how the transformations, the practices, and the forces inherent to it are understood. Differences of scale, more or less strange to sensible experience, are thus determinants of historical understanding and consciousness. Pronouncing on the Benjaminian notion of the “dialectic-image,” Didi-Huberman (2000/2017) clarifies:

“Like Warburg, Benjamin placed the image at the nerve center of ‘historical life’. Like him, he understood that this point of view required the elaboration of new models of time: the image is not in history as a point on a line. It is not a simple event in the historical becoming, nor a block of eternity insensitive to the conditions of this becoming. Rather, it possesses – or rather produces – a double-sided temporality: what Warburg had learned in terms of “polarities” (Polaritӓt) observable at all scales of analysis, Benjamin, in turn, would eventually apprehend in terms of “dialectics” and “dialectical image” (Dialektik, dialektische Bild). (Didi-Huberman, 2000/2017, p. 115).

In particular, Thessaloniki’s shape (or its image) is easily perceived in its historical polarity, as a dynamic morphology that makes us travel in the various spatio-temporal thicknesses, at the same time turned to an archaic time, materialized in the debris that inhabits it, and to an anachronistic temporality, manifested through “paradoxical symptoms” (Didi-Huberman, 2000/2017, p. 116), of rhythms and counter rhythms: modernist architecture, the frenzy of circulation, urban art, idleness, ruin, abandonment…

In the high part next to the walls of Thessaloniki, in the Ano Poli area, another layer of the city can be discovered. From there we can see the skyline that would have inspired Aristotle while he was teaching Alexander the Great (or Magnus) before he moved to Athens. Such a sight makes one feel dizzy, physically and intellectually, because stepping on the same ground and seeing the same horizons that would have been the surrounding environment for the philosopher’s thought is deeply thrilling. Those who walk there discover a wall that was semi-reconstructed from stones that fell to the ground, which were paved and with which parts of it were rebuilt, interspersed with small houses, generally of a very humble appearance, some abandoned. Graffiti also proliferates there, as well as unusual objects hanging from the gates, of indecipherable meaning. On the streets, we can see few people. Many of the houses either have their doors locked or their windows shuttered, looking uninhabited, or even in a state of marked degradation. At this point of the tour, the feeling of being in a social neighbourhood prevails and the spatial symptoms of degradation, closure, graffiti, degraded public space, underline this same feeling, later confirmed in conversation with some urban planners and colleagues from Thessaloniki.

The entrance to the visitable part of the wall is closed and only the enjoyment of the views remains. If the wide views of the sprawling plain below seem to express the normative and orderly body of the city, up here a fragmentary topography reigns, a general and apparently unplanned misalignment, surrounding the debris of the wall. The following passage, regarding the segmentation of urban phenomena, illustrates this same impression:

Resuming the Benjaminian metaphor, we can say that, if from above the evolution of the territory seems singularly coherent, observation on a meso-analytical scale produces the fragmentation of a phenomenon into different disciplinary fields, blind to each other. (Gribaudi, 2021, p. 103)

Near the entrance to the wall, a tavern catches my attention. On the balcony, covered with a branch, are some locals finishing lunch. I notice in particular a priest (judging by the clothing, from the Orthodox church), who is at a table, chatting with a woman. The tavern is decorated, inside and out, with illustrations and various objects without connection, but giving an interesting aesthetic feeling as if revealing an ancient culture made of so many remnants, in the image of the city, of disconnections that result in an interesting impression of civilizational stun. The basketry chairs also appeal to my gaze. I immediately think of the red painted wooden chair and matching seat I have in the foyer of my home, while I travel to Van Gogh’s Chair with Pipe, painted in 1888. Across the street, there is another row of tables and chairs, with no customers. The heat makes walking difficult and the coolness combined with the shade, on the balcony, invite us.

In the company of Isabel Marcos and Ole Møystad, with whom I had taken a cab to the hill, I sat down on the terrace for a drink. The man serving at the table looked very unfriendly and seemed annoyed with our presence. Even so, we ended up ordering a typical Retsina wine, mineral water, and black olives, served drenched in olive oil. We spent a quiet hour and a half there, while Ole recalling, by association, the times spent in Beirut, recognizing similarities with the surrounding atmosphere.

Walking down the hill, with the Mediterranean at some distance in the field of vision, the same ambience and the feeling of emptiness of street life are our company. Only here and there, far and wide, one or two young people can be seen, perched on a piece of wall and enjoying the landscape. It is already late afternoon and the sunset composes an illustrated postcard, with subtle variations of light.

[The experience of wandering around Thessaloniki that is described here, to one voice, is interspersed with the occasional sharing, considering one or another slice of the route taken by Helena Pires, with Isabel Marcos and Ole Møystad. Thus, in this text, knowledge and impressions, namely about the city’s history and urbanism, resound added by three hands. Therefore, it is assumed its co-authorship. It should also be added that the photographs are also shared between the three campagnons de route… ]