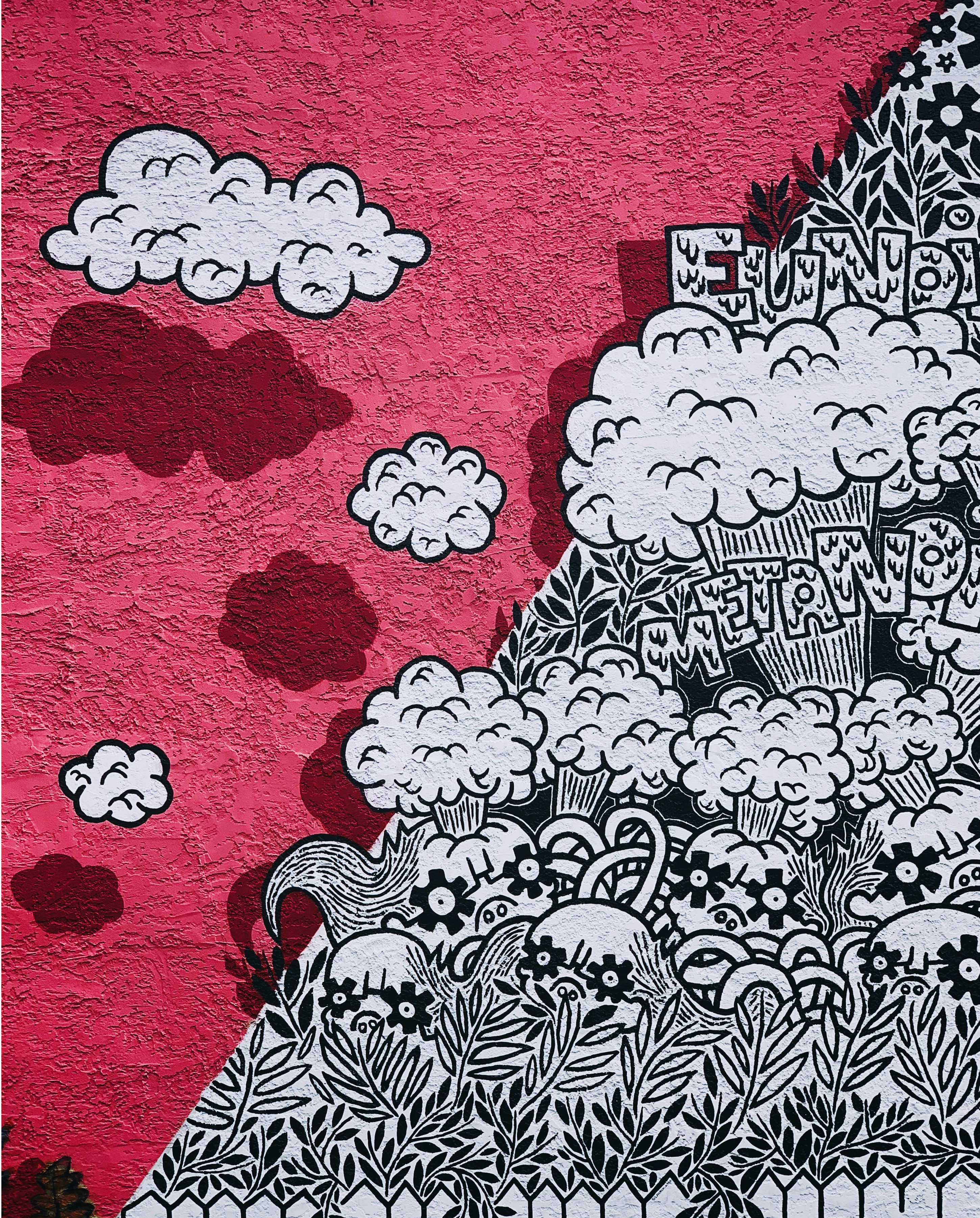 Suburb in the city

Living is too dangerous

If the body is our first home, the home that populated me was my grandmother. Fresh was my childhood home. With clean sheets and smell of soap. I cried when the old walls were demolished, walls of poor people, without architectural, aesthetic or artistic significance. I cried the end of the house located in a village-like suburb.

In the evening, when the sounds are amplified, the steps resounded in the gravel, and one groped the path in the dark, guided by the lighthouse, the certainty of a light in the wicket. The light door banged like a pendulum and that comforted my sleep, as well as the perch-coo of the turtle doves in the heat of the siesta. Inside the house, meringue kisses that are made in the afternoon, to eat with tea. Perfect were the plastic cups, with which we played to make cakes with the soil of the backyard, on the store’s dirt floor. In its continuity, the width of the field. There was a stream of water, that walked through the sweet wisteria, that skirted the manure from the poultry and ended at the fluffy herbs, as that imagined light beyond the horizon, where all adventures were possible.

Outside the house, a dusty bus, on its way to the city. First the doors that brushed the old bus, seemed to pass us, waving. Then, the dirty mixture of what they call “the city”. What a fright! A smelly cackling of feathers, floured guts steaming around the floor, greasy floors and a rush that coloured the saturated air. The performance of the dance of city, which was also a box of sugary pastries. Sometimes, Porto gave me a hand without intimacy, going through the hollow of the unknown. A cave-house, of old people, with a smell of humidity without windows.

In the light air of a winter afternoon, I saw the lights of the trembling city, diluting in the rainy panes. In the distance, the silent noise of a body that sometimes shelters us, sometimes spits us out, always enigmatic and suggestive. Down there, the trees are filled with birds that fly excrement to people passing by. This is the city mocking us, acid and playful. With a picturesque touch. Like the tram, squealing attention. It asks us to inhabit on it and then we swirl in the cold of the night, snuggled in a movement of the carousel, which finally presents us with a jocular city. We breathe the night air and almost believe that the danger does not exist. But inside the building with countless windows, even the sophisticated scent of those who inhabit the space inhibits and retracts. Because there are little buttons that sign an address, not a wicket that shines in the silence of the night. And inside one of the countless windows, the sounds are drowned out by carpets with that same smell of sophistication. In the centre of the table, there is a cake with egg threads, which I see for the first time and do not have courage to touch. Dozens of city Lilliputians gather the egg threads, like those who see a lot and are not frightened by anything. I sink on a soft couch, with the same scent of the stairwell, which confirms that the city is as violent as the first few seconds outside the mother’s womb are violent.

Warm Sunday afternoons, smelling like the leather of new coats. The lassitude of the street causes a nausea that one detests and tastes, as something that we must like. Perhaps withered sausages turn on themselves for the thousandth time, while, in the cauldron next to them, the rancid of pork steaks bubbles without complexes. In the garden, lovers kiss each other on the “mouth”, oh! Right there beside the church.  The mess is as much a city as the city presents itself to me. In between the granitic grey, without expression, an indifference that strikes. The priest’s eyes cannot be seen, but they see us, even if we camouflage ourselves in a hidden corner. There is no waiting nor ritual. An excitement!

Further away, a straight avenue, with buildings with sharp edges, where people circulate in the silence of dusk. I like to imagine that the trip won’t end, between perpendiculars that tear verticals lines, curves that open themselves in trees and lamps that illuminate the twilight. Ah! The city that rests, without riddles or revelations. Just by itself. Inhale and exhale, without haste, with no longer the worry of wanting to appear. Eyes half closed, remade from a busy day. Just the blink of the lights, the meekness of the roll that falls on the car and the illusion that all life could be walking around the gutters, expecting nothing, but wanting everything. The square that was filled with families is already quiet. In these afternoons, yes. Women without surveillance. Around the square, one took a cup of coffee, inundated by the smell of newspapers and magazines that looked at us with a new and promising air of urbanity. Just like when we returned from the dentist, compensated by a “cimbalino”[1] with milk and a piece of cake, after a book bought in the city.

Then, football Sundays (without reports) were a joy for children running around Praça Velasquez, with games that were only interrupted by the bruaá (noise) of the football stadium. The chicks got together chattering and suddenly I heard the expression “kiss on the lips” (what a scandal!). This was the coquette city, with clean streets and houses that one wanted to invade. Without being seen. What lives would unfold in these houses with small round gardens? I imagine a smell of freshly baked bread that was bought a few minutes ago and homemade marmalade with a translucent orange colour. The existing order there seemed to be cosy, an order coming from a place that is known without knowing from where we know it. We wish to stay, in this new food smell, that we want to try.

The memory fragments listed are deliberately evocative. We believe, like Bachelard, that “shelter values ​​are so simple, so deeply rooted in the unconscious, that we find them more easily by a simple evocation than by a detailed description” (Bachelard & Danesi, 1996, p. 22). The childhood space is a place sheltered from undefined dangers. Between the fear of the unknown and the attraction for the new, what remains are the meanings arising from the interaction between the self, the city and the many characters that populate it — including the city, with its buildings, its streets, its trees, its tremors. We fix these memories with delicacy, like holding a fluttering butterfly, trying to retain its shape, but without eliminating its flow. This is a territory of tensions. Of time with space, of continuum with the object. And when objects are lost, experiences remain translated in a space for conversation, reverberating through memory, through words that materialize themselves in this act of writing, through the sharing of what is lived with the community. Between the child’s inner world and the experienced reality, meaning is built (this discourse that I now express and share with those who read me). It is possible that other meanings are produced in this relationship, thus justifying James Carey’s ritual vision of communication (Carey, 2009).

One also attempted, albeit somewhat unconsciously, to verbalize the place of security of the house, in confrontation with the space of freedom of the city, by Tuan (Tuan, 1977). From the child absence of limits, who takes the body of another as his own, being the experience of space conditioned by the feeling nurtured by the adult. The city can be as cold as inattentive is the hand that guides us through its paths. Or as warm as interested is the conversation of someone who presents us with a packet of candies during the movie theatre break in the big city. For the child I was, all the senses can be hyper-enhanced in reading the city. The smell of freshly cooked guts is a hurricane in the nostrils. The women’s trading sessions in the market are sharply directed at me in spite of my wish to remain invisible. The movement is a kaleidoscopic of knives, eyes, aprons, blood. And even flavours are usurped from the adults. From coffee with cream, to the coffee in a glass with a metallic handle. This city that we intuit, is under our skin as an immortal being. It is she that we look for, in its renewed versions, on our unplanned walks, guided by a more emotional than aesthetic sense, asking the city to scare us more, welcome us more, to present us with its multiple senses.

Collection “Os cinco”, by Enid Blyton, which made me forget the dentist’s chair.