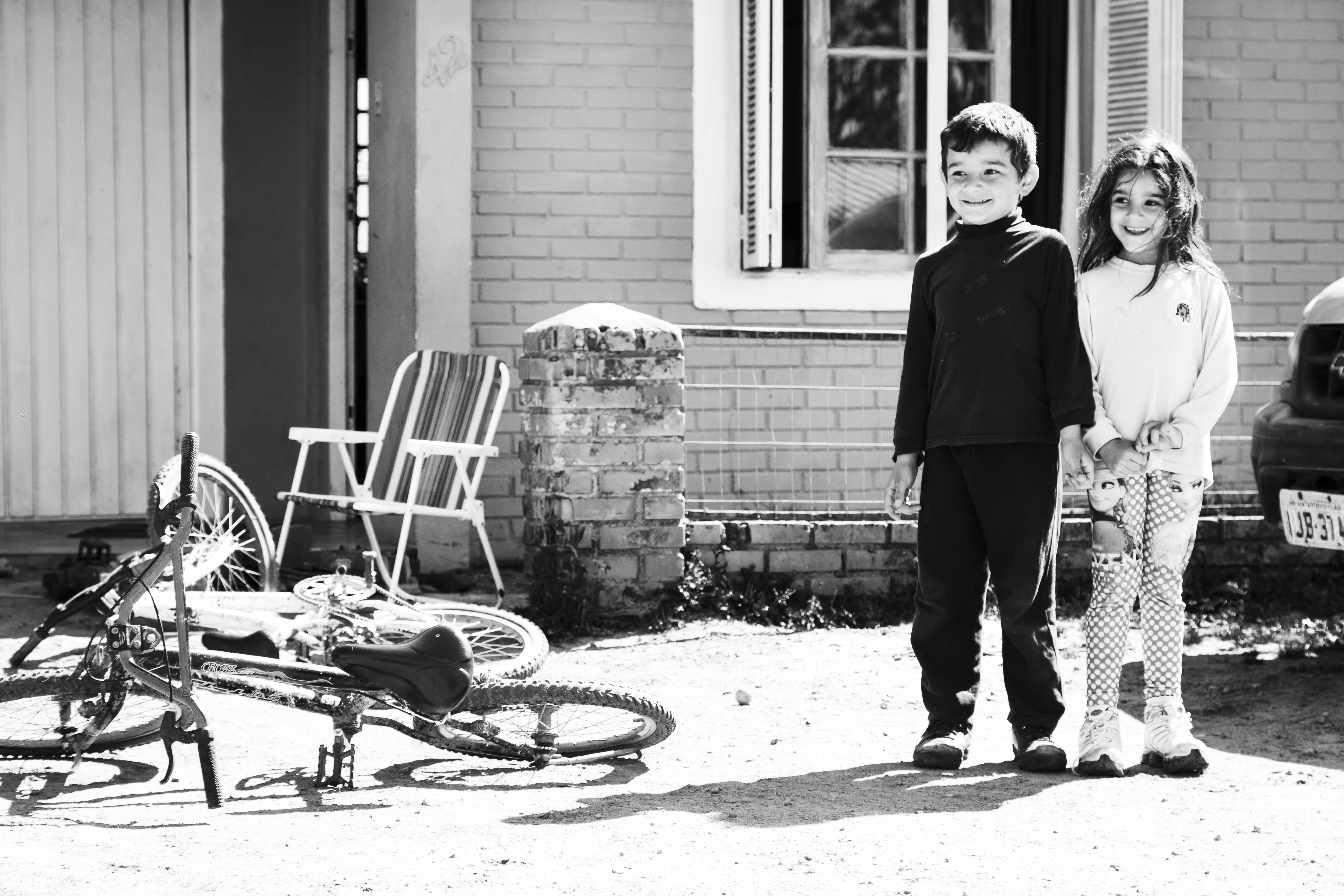 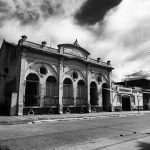 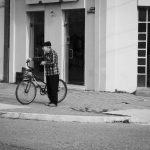 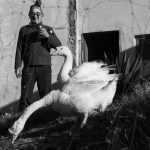 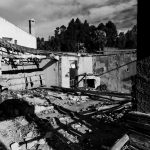 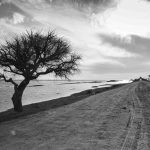 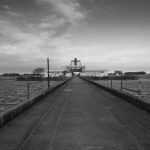 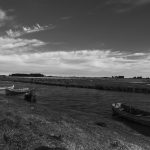 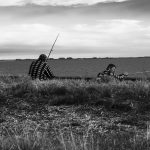 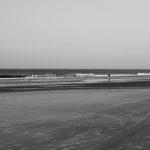 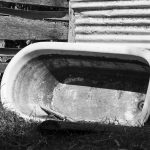 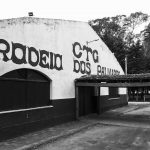 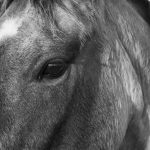 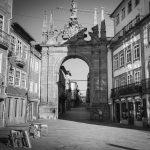 PERFUME: Essay on the photographic series “From the South to the North, Santa Vitória do Palmar is in Braga”

The childhood city is the ground serving as the basis for the perfume exhaled by us. Naturally impregnated with this smell, I walk through its streets, landscapes, and in its daily life I soon come across with the thought of Lefebvre (2011): “the city is a work to be associated more with the artwork than with a simple material product”. In its creative act, the childhood place is the one that best manipulates the fantasy of time. Is the childhood city the time machine already experienced in fiction?

When you walk as a child, there is time for the balance on the short wall, to pick the fruit from the apple tree’s roots, to count the vehicles passing by. It is in this scenario that the house I lived among my five – seven years is revealed before my eyes. As in dreams, I see the main scene of that trip reproduced: in front of the house, a couple of little brothers (he’s six and she’s four years old), toys, the striped fabric chair, the bicycle on the floor, the shy and pure smiles. A quarter of a century ago, If it was someone else (other than me at that moment),the cameraman passing by that dirt road, in front of the camera lens would be my sister and I.

There is right here a space for an important warning: when on a return trip through the childhood city, the eyes tend to have a moistened glow.

February 12th is the greatest day of the year to feel the scent of wet earth in my childhood place. Fragrance of a land in the extreme south of Brazil, with profound relevance in historical terms, scenario of intense disputes between Portugal and Spain until 1777, when, the “Santo Ildefonso” Treaty was signed between the two crowns. The bilateral agreement made the region known as “Campos Neutrais”, as it is an area without occupation between the domains of both crowns.

This naturalness, stamped in my documents, emerged in the same year as the famous abolitionist letter signed by Princess Isabel, more precisely on December 24, 1888. In that century, previous to preceding my first cry, the village rose to city status. In this way, “Santa Vitória do Palmar” was born.

This is the city of livestock, rice culture, of the Square “General Andréa”, sports meetings and masquerade balls at the “Clube Comercial”. Santa Vitória do Palmar is located, with its grid layout and an area of 5,244.18 km2, on the limits of Brazil with Uruguay. It is from its 19km distance from Uruguay that the facility for speaking Spanish is born, the taste for bitter (“chimarrão”[1]), conversations and “truco[2]” nearby the wood stove, all them manifestations of campaign customs.

To those who come from the neighboring country, my childhood city is the beginning of Brazil and, by nature of fade, the origin of my principles that sprouted accompanied by blows from “minuano” wind, a cold wind of polar origin that makes more severe the winter in southern Brazil. Nowadays, in addition to enhance the sensory experience of the cold, “minuano” in its constant feature of windy moves the largest wind farm in Latin America. In the present, it is in the turning of these blades that I notice a slight visual discontinuity when watching the sunrise in the open field landscape that I capture with the prism of the time machine.

Being born in a city whose border is crossed by taking a step on foot, was an omen for a life that is built on walking and on the discovery of new corners around the world. It is on the streets of that city and still in the initial steps of childhood that I follow my first funeral towards the cemetery. In the steps accompanied by tears, the discovery that a person can also die young, and most cruelly, doing what one loves. Today, knowing that one didn’t choose the ashes, I walk through the same cemetery and come across a fundamental part of my story: my ancestors lie on it, with their names stamped on headstones. The cemetery’s silence will always find my respect.

Let’s move through the city, life is just beginning. I hear the Brazilian national anthem playing and I find myself in front of the “Cardeal” Gymnasium. It looks like the same of my memory as spectator of the Brazil x Sweden in the Football World Cup of 1994. Gathered inside this space, hundreds of people explode in celebration of the “baixinho[3]” goal! Joy, euphoria, screams, hugs! Manifestation of the certainty that, although the nearest Brazilian city, Rio Grande, is located 220 km away, we really are citizens of Brazil.

Brazilians from a city whose urban daily life is still permeated with simplicity from the countryside. Not by chance, it is here, in this small farm located on “Getúlio Vargas” Avenue, in this old house (that today I find in the rubble of an incomplete demolition) that I was born and accumulated my first memories. With them, the pig’s meat for the birthday celebration, the cows trapped in the shed, the aluminum bucket for milking, in front of it, the shade of the pine of my first games with toys made with the use of oil cans that, trapped and pulled by a string, turned themselves into powerful cars. Faced with the rubble that once housed me, I still feel the affection of my neighbors, reinforced by the  presence of floor that supported my first steps, still remaining there,   a few steps that led me to the corner of the kitchen sink that gave rise to the mark on my forehead that I will take with me to beyond my last day.

The path that leads to the city’s port, built in 1938, goes through that same “Getúlio Vargas” Avenue. I follow the footprints on the sandy path. They guide me to the dock. When I arrive, I watch my mother working in front of the door of the cold room. The fishermen gathered around them register the daily fishing numbers and collect their receivables. As small vessels land, fish boxes are stacked and stored. The brand “Japesca” is printed on them, the name of the local fishing organization. Today, I find this port, that once was the source of our family support, at a new pace. The activity of the fishing community and the flow of products through “Mirim” lagoon, the largest in Brazil with 185 km in length, are no longer active. But, as I travel in time, I realize that not everything is discontinuity in this port, in its vicinity it is possible to find canoes of native fishermen who continue to extract their livelihood in the flow of these waters. The deactivated port became a destination for lovers of the sunset, who gather at dusk to contemplate and enjoy their “chimarrão”.

It was before dusk, on the way back to the sand path, that “Cusco” (dog) called my attention to the sound of the sea. This sea of my childhood is accompanied by 140 km of coastline, an immensity filled with peace and harmony. Sometimes, to the sound of the sea is added the sound of the southern lapwing, the noise of the vehicle that crosses the long strip of sand, the noise of the homesick drowning his longing in diving. For he or she, the cold is indifferent. After all, we are loons. It is curious that I, son of that sea, still have difficulties in swimming up to the present. It turns out that the Atlantic Ocean on this meridian does not tame easily and once deprived my feet of the touch of sand. The strong personality of this sea that has already submerged the young surfer makes the strip of sand ,now found extensive, often give up its place to the waters so that they can remove those who tried to build a dream house on a ground that was not theirs.

On this journey, the blue sky — the same one of my childhood — has exposed the bathtub that sheltered cleanliness on summer and winter nights to the wind. In the absence of electricity, the water from the well was boiled on the wood stove, while in the bathroom, the portable shower or bucket waiting for the hot and cold mixture, allowed, there in that bathtub, the cheerful bath.

This is the joy that surrounds the GTC (Gaucho Traditions Center) Rodeio dos Palmares, a landmark of the gaucho culture and the memories of my first dream: being a rider. I practiced for hours and hours on the horse that my most liberated childhood imagination projected on any object found. It is also here, in this GTC, now with closed doors that allow only the entry of my memories, that my grandfather’s 80th birthday was celebrated with a beautiful and traditional gaucho barbecue. An occasion when, feeling distant from my childhood city, I created a debt of absence towards him. In the furor of youth, I did not notice that life is made in the present and that he had gathered everyone to dance the last meeting. It is wrapped in the striking smell of the eucalyptus trees of this center of “gaucho” traditions that, when closing my eyes, I silently express my request for forgiveness and tell  how much I missed him.

In the nostalgic childhood field I did not use the oral word to communicate. I purely harbored the desire to communicate with horses. The channel was the sight. Often, without adult consent, I spotted them on the pasture and set my small steps up to meet them. I have failed many attempts due to the sound of my steps in the dry pasture or to the smell of my presence carried by the wind beforehand. But, in mychildish belief,  I could  see myself reflected  in equine eyes on the meetings of my childhood belief.

If today, with my body at 9,521 km away, I can, in the blink of an eye, return to my childhood city, it is because since I arrived in Braga its base note has been identified with greater intensity. I start again, I feel like a child again. Here, in Braga, in the similarity of the climate that brings the dawn with frost and fog, in the quiet daily life that stops the sad impacts of contemporary plague and makes walking more natural, in the aroma of burning wood, in the nearby nature that allows you to experience river and sea, in the meetings in the square … There is something magical transforming the “Arco da Porta Nova de Braga” into a portal to the city of my childhood.

If the city of childhood is not lost in time, where its perfume will be felt?

Christian Baes (1988), represented in Portugal by Zet Gallery, has a degree in Audiovisual Production by Unijorge-BA Brasil. Photographer and creative, specialized in authorial series, appears in contemporary times with a work that denotes a sensitive observation of everyday life. In his visual narratives, the characteristics of a photojournalist are perceived, immersed in the aura of the spaces he travels, capturing them, like Atget, with a cinematic ambiguity, full of silences, action and magnetism.

[1] Chimarrão is a traditional drink from southern Brazil, of indigenous origin, made from yerba mate and consumed hot in a container known as “cuia”.

[2] Truco is a traditional card game played by the South American, Spain and Italy.

[3] The nickname for the football player Romário