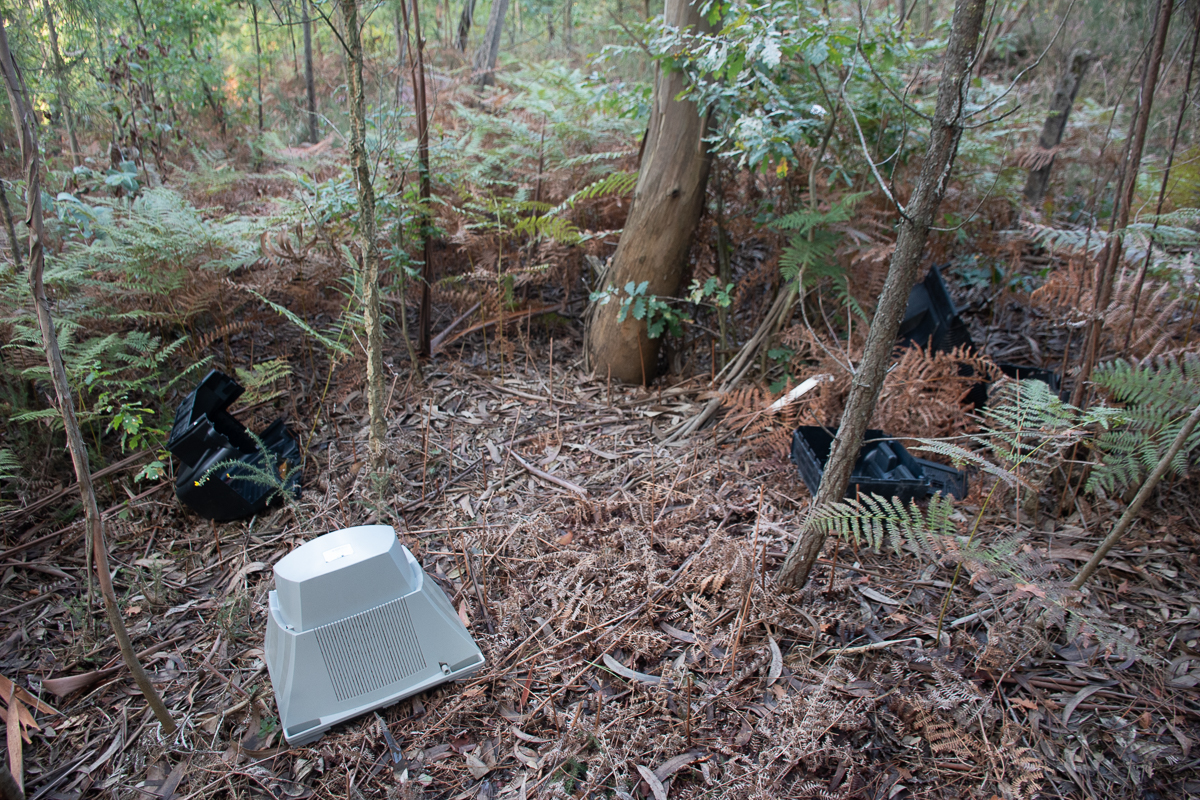 Visual metaphors of (the ruin of) digital culture

Computers on the ground; monitors scattered in forests; plants connected to computer cables… which combinations are these? This brief photographic essay records unimagined encounters with computer hardware in green spaces of different regions of the country. Coming across these hyper-modern objects in walks that sought the “natural”, the non-“man-made” in our environment inspires multiple reflections.

From a desk to a forest floor We are used to seeing computers in offices, in closed spaces or our homes, in other words, always inside buildings, especially in the case of “desktops”, which usually have large monitors. Seeing computers outdoors would be odd enough. Seeing them on the ground would be even odder. When that ground is a forest, the sense of unexpectedness increases.

But is this really strange or unusual? At a time when there is so much talk about a circular economy, where do our objects really end up? Something that at one point was the most modern technology ended up, in this case, shattered and dumped on a forest ground located a few hundred meters from a city. At some point, someone decided to remove these computers from built-in spaces and use this “natural” space as a dump for their (professional? personal?) lives. Quotation marks are used here because, although we usually call “nature” what we see in these photographs, these are spaces that have been long forested/planted by Man; the concept of “nature” is, in fact, deeply contested (Macnaghten & Urry, 1998). But even in the scarce areas of the planet that are still natural, large amounts of waste from human practices it can currently be found, for example in the form of (micro-) plastic or chemical substances of various types. These photographs can be read as metaphors of the Anthropocene or of the “end of nature” that McKibben announced in 1989. Previously seen as something separate from human beings, nature is now indelibly marked by the actions of billions of people.

Communication and information technologies are today one of the most worrying sources of “garbage”. In addition to metal, glass, and plastic, they contain chemical elements that are impossible to recycle and are highly dangerous. Despite symbolic associations with post-industrial societies, electronic communication devices have a very heavy environmental footprint (Maxwell & Miller, 2012). The remains of our mobile phones, computers, televisions, tablets, and similar are exported outside the “safe” spaces of Europe and North America, ending in many cases in African countries, with profoundly damaging consequences for the local environment and human health. A provocative question is necessary: if this is the case, why not lodge this waste in our environment? Are these photographs not the expression of a more honest and fairer act than the neo-colonialist management of the garbage we produce? In figures 3 and 4 above we see part of an artistic creation located in the Protected Landscape of “Lagoas de Bertiandos e São Pedro de Arcos” in Ponte de Lima, Portugal. On the ground, around a square space, an odd construction is repeated: a monitor encapsulated by a window/door to the E/earth. In some cases, presumably due to lack of maintenance, the earth has almost swallowed the monitor, as in the fourth figure.

What meanings does this artistic creation suggest? Why connect computers to the soil? What are the possible meanings associated with the metallic structure that seems to constitute a communication channel to the interior of the Earth? Are computers the oracles of our time that allow access to “deep” truths or a kind of “conduct” to other levels of reality? The computer can also become a totem, i.e. another expression of spiritual veneration. In this construction, seen during a walk around the Monastery of Tibães, the totem does not represent animals, such as an eagle or a wolf, as was common in the totems of various ancestral cultures. But, as in them, it connects to the earth and integrates natural elements, in this case, plants, which “fuse” themselves with the materiality of our digital culture. As mentioned above, there is no single view of “nature”. Techno-Nature and other hybrids can be constituted into the new theological objects (Kull, 2016).

Unlikely final address for what was once modern With a five-star hotel as a backdrop (Meliá Braga), the first photograph “speaks” about the “fast culture” in which we live: a constant desire for accumulation, greater pleasure, greater speed. The “pieces” of this “fast culture”, like those of “fast fashion”, are quickly discarded, often finding their last home in unlikely places. “Fast capitalism” meticulously plans the obsolescence of our electronic gadgets to continuously sustain and accelerate itself (Agger, 2004). Human obsolescence may already be on the horizon (Müller, 2016).

The toilet in the foreground of figure 8, in juxtaposition with the inside of a monitor and plastic bottles, is not part of an artistic creation. But it is possible to see there a message about our intoxicated modernity and its “day after”.