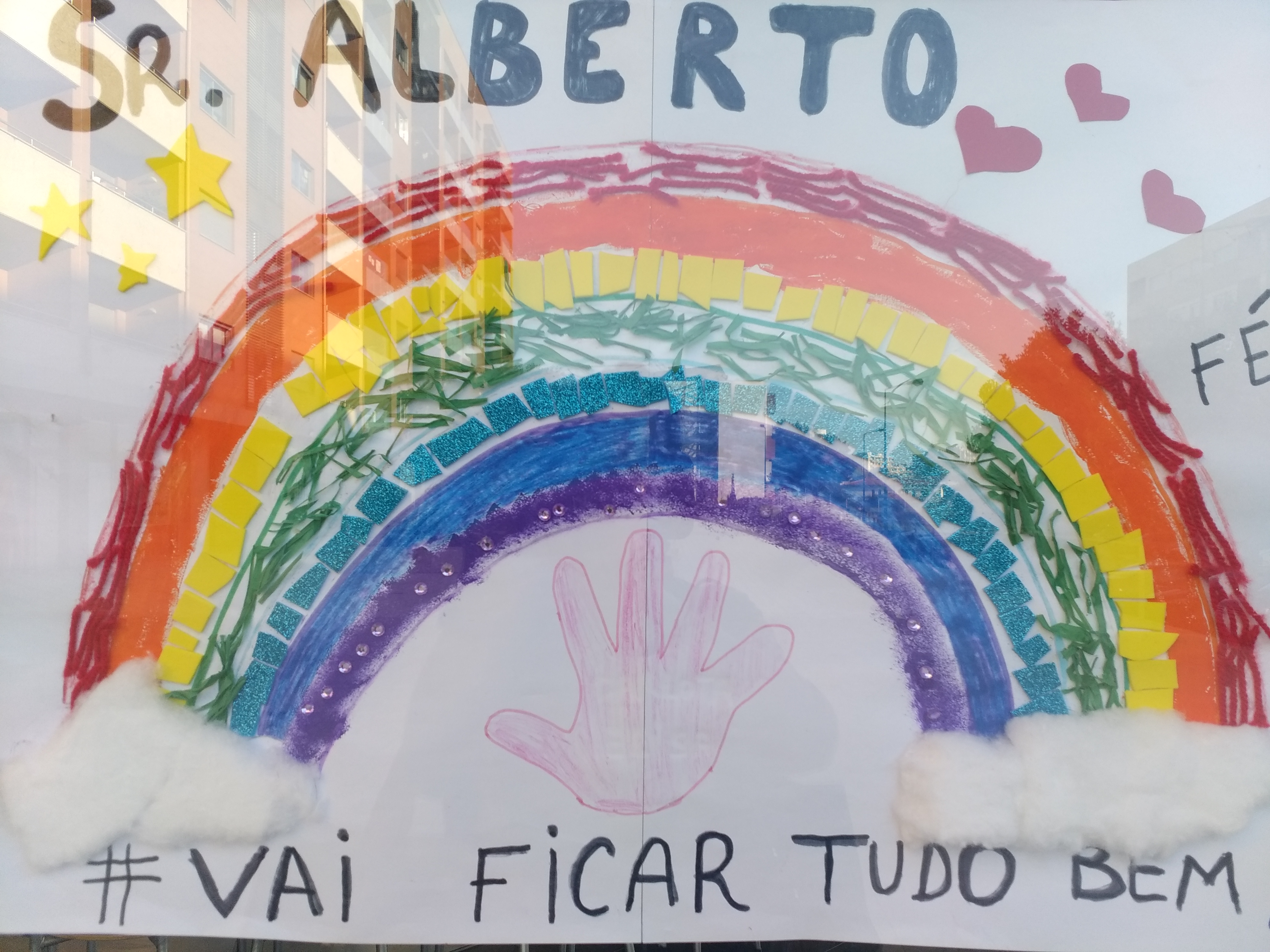 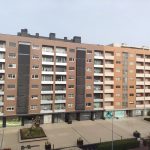 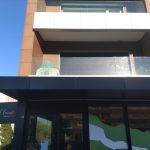 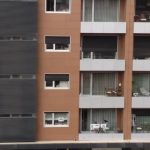 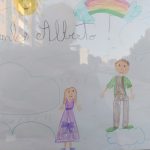 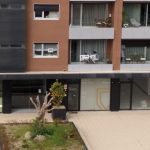 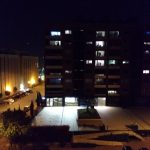 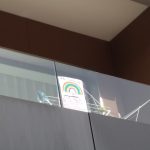 In Rear Window, Alfred Hitchcock’s movie, the development of diegesis, from beginning to end, takes place in the domestic spaces that the windows, balconies and terraces, allow Jeffries to stalk at. Having broken a leg in the context of his activity as a photographer, and therefore being immobilized at home, the main character has no alternative but to be entertained by the daily observation of the neighbors’ routines in the building opposite: the dancer exercising every morning, the pianist, the lonely and romantic woman who insists on setting the table for two, decorating it with lighted candles, the neighbor who brings down her adorable little dog every day, in a basket attached by a rope, to the common courtyard…

The gymnastic exercises on the balcony take on a routine character. In the morning or late afternoon, the time to ‘get some air on the balcony’ punctuates the day’s schedule. Individually, or in family, the scenes of this type, with variations, are repeated: “A little later, father and daughter appear on the balcony. They do physical exercise, coordinating movements among themselves. Push-ups and stretches. Then the daughter leaves the porch and the young father goes on, skipping the rope for a while. For a fraction of a second, the view of the building in front is mixed with the image of the choreography with Vasco Santana and Ribeirinho doing ‘Swedish gymnastics / underwear’, namely push-ups at the house window, dressed in white underwear, in O Pátio das Cantigas” (excerpt from field diary, March 21, 2020).

Cleaning, in turn, becomes slow leisure practices. The drying racks, of varying shapes, now welcome clothes washed more frequently, from body and bed linen to rugs or cushions placed in the sun. In some of the balconies we noticed that the cleaning maids are no longer appearing on the balcony, being replaced, it seems, by the fathers and mothers who started to take charge of all kinds of tasks: “It is late afternoon and the light it is now pale. The individual suddenly takes over with a bowl of clothes that rests on the porch tank. With indolent manners, he carefully picks up each piece, dusting it slightly and lifting it close to his nose, before resting it on the clothesline. This chain of movements is interspersed every few moments for short intervals, occupied with the rest of the hands resting on the bars and the stroll of the gaze over the street” (excerpt from field diary, March 18, 2020).

The outdoor furniture, while cohabiting with the clothes line, decorates a second living room: “On each balcony the decor differs. Now there is a set of table and two chairs, in the style of IKEA or Leroy Merlin, sometimes large armchairs for resting outdoors. One of these chairs is a swing type” (Excerpt from field diary, March 17, 2020). On each of the balconies you can see children and adults, at different times of the day, in a permanent entry and exit. Adults, sometimes they just sit down to have a smoke or smoke, or often to talk on their cell phones, sometimes they interact with their children, with whom they sit at a table with board games, with whom they water the plants, in some cases, or with those who simply talk, taking care of the little ones’ sudden entrances and exits: “On one of the balconies there is a tent set up, in the shape of a doll’s house. Two young children, one of them at crawling age, spend endless time disappearing and reappearing on the threshold of the ‘door’ of the tent, dragging some toys with them …” (Excerpt from field diary, March 17, 2020).

Seeing well, the balconies, extending domestic life to the outside, and lending themselves to any number of multifunctions, present themselves as small squares, meeting places between family members, but also sharing with the social sphere of all those who, at the same time that show themselves, are peeking into the daily lives of others, participating in a kind of ‘community theater’ without a predetermined stage director or argument, although linked by the inherent relationship between stage and audience that all balconies, front ahead, they establish among themselves. The day-to-day novelties are gifts offered to the neighbors’ vision, voluntarily or involuntarily: “We count about eleven drawings with the rainbow motif, in alignment with the messages of hope like «Let’s all be well» placed on the balconies of the country and that have been reported by the media, hanging on the acrylic tabs of the balconies. On one of the balconies, mother and daughters hang the drawings with sticky tape on the eaves. In another house, the same motif drawn is displayed in the house window, facing the outside. In yet another case, ‘Mr. Alberto #Let’s all be well!’. I suppose it is the owner of the cafe below, adjacent to the patio, frequently visited by the inhabitants of the adjacent building, who usually, in normal times, spend long afternoons or mornings on the terrace, while their children play ball or rollerblade in the yard” (Excerpt from field diary, March 20, 2020).

Each balcony is a threshold that separates the inside from the outside, the house from the street, the safe shelter, the ‘shell’, as Bachelard would say, in The Poetics of Space, risk and the unknown. We found, by the way, the following words by Byung-Chul (2018, p. 45): “Fear also occurs at the threshold. It is a typically preliminary feeling. The threshold is the gateway to the unknown. For the threshold side, an ontic state starts completely different. Therefore, the threshold always bears death in it. In all rites of passage, rites de passage, one dies to be reborn over the threshold. Death is experienced here as a transition. Whoever crosses the threshold undergoes a transformation”. The thresholds that we observed in this micro-test produce a double phenomenon of near death. The transformation of daily life, brought about by the suspension of active life and work, left suspended outside doors, on the one hand. And the transition from private and intimate life, confined to the interior of the house, to the reinvention of oneself and presentation of oneself to others, in the Goffmanian style, on the stage that the balcony has become, on the other.

The distance between the buildings that face each other does not allow a clear hearing, no more than some deaf and distant sounds, of the soundscapes produced by the observed scenes. So a reigning vision prevails, interrupted by the noise of one or another car passing by. At daybreak, the silence is interrupted by the surprising singing of a rooster. And at the beginning of the night, the loudspeaker of a van stands out, passing slowly, projecting messages of appeal to #FiqueEmCasa. The soundscape reminds us of an apocalyptic ambience. Each family confines itself to its micro-universe, only broken with exceptional initiatives, such as the night when, in response to the call on social networks, on March 22, they went out on the balcony and clapped, some more timidly, others more enthusiastically, thanking health professionals.

These and other portraits of the observed daily life lead us to think about the recreation of meanings that these times of restricted social life provide. The images that are daily published on social networks and the media, showing performances spontaneous on the balconies, musical performances, recitals, etc., speak well of the way individuals reinvent their sense of community. At the same time, the demarcations, the physical ones, but also the invisible ones, that separate us seem to be emphasized. Each ‘takes care of their own’ and is invited to promote social detachment. With this thought, we are led, by the hand of Richard Sennett, to reread the tragic meaning of modern life (post or trans-modern, as we wish) of which the author speaks in The Fall of Public Man (1977). The concept of ‘transparency without transition’ illustrates how we erect invisible and insurmountable barriers between us, in the most varied contexts of social life in everyday life. In his most recent work, published in 2018, Building and Dwelling, the author, using Husserl’s phenomenological thinking, paraphrases: “Alien, brother and neighbor. This trio of words defines the Other…” (Sennett, 2018, p. 123). The sense of strangeness and impermeability to the other, the melancholy loneliness of those who are condemned to intransitoriality, or the ‘paradox of isolation in the middle of a visibility regime’, finds expression, namely, in Edward Hopper’s pictorial work. Returning to Sennett, note the following passage: “The cities in which we live today are closed in order to reflect what happened in the field of technology … the growth of cities has not produced much experience in form. The office complex, the school campus, the residential tower with a patch of green are not friendly ways to experience, because they are all self-contained and not open to outside influences and interactions (Sennett, 2018, p. 11). Letting ourselves be contaminated by the author’s thoughts, we ask ourselves: aren’t the balconies the forms that best metaphorize the invisible injunctions of self-containment in everyday social life? At the same time places of active life and made visible to the other, an interval of inter-est, in Hannah Arendt’s terms, as of incommunicability?