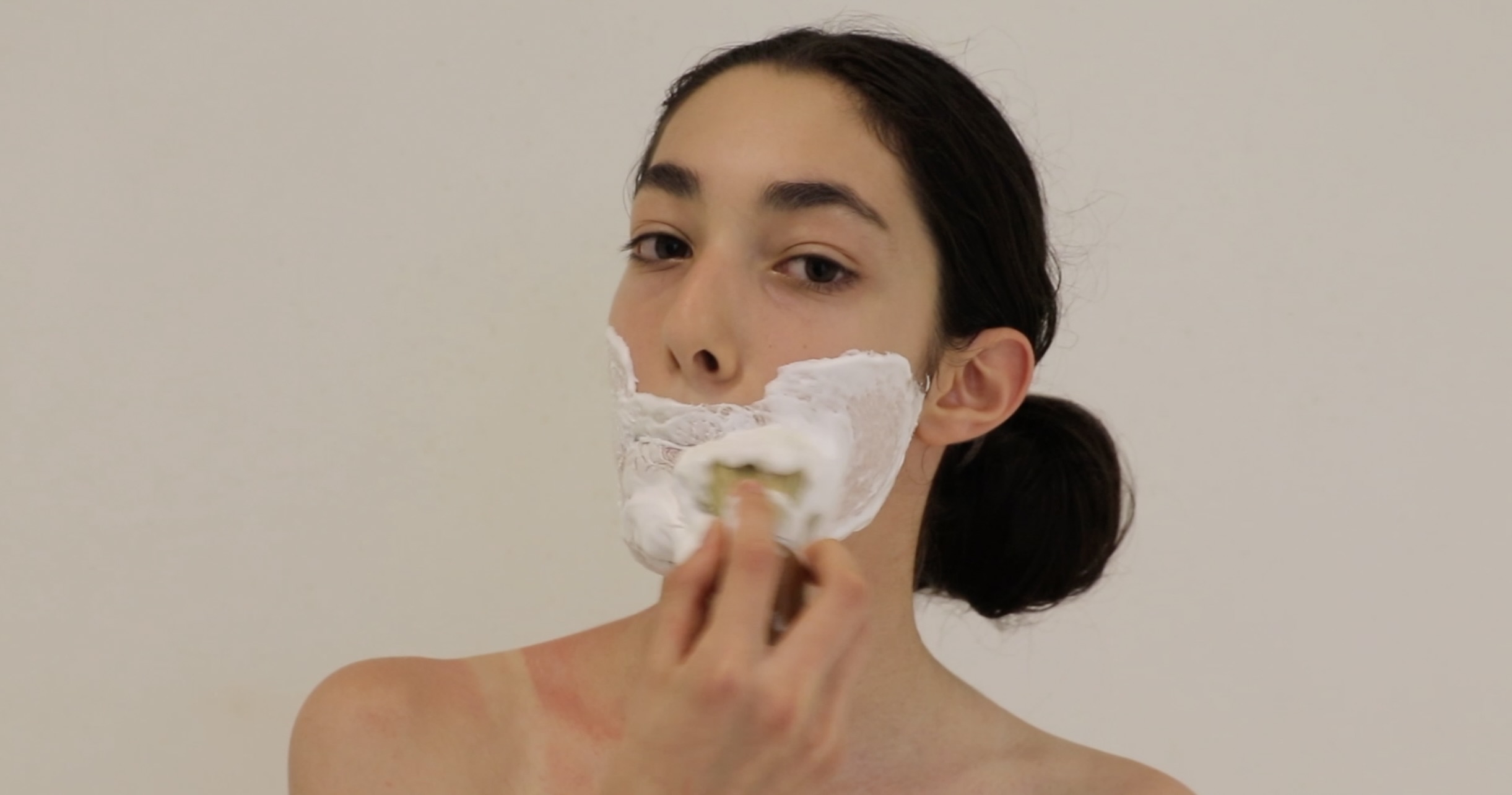 Clémentine* shaved regularly, maintaining an appearance equal to any woman. When she discovered someone who didn’t do it, she overcame her prejudice in a superb way: competition. In other words, this made her rise to the impossible. As the master of her own destiny, she contributed, with her grain, to the advancement of society or, simply, to countering the idea of the impossible. The historical connection between the body and art, on a temporal background that goes from the artistic avant-gardes of the beginning of the 20th century to the present day, is one of the concerns of the artistic and educational work, developed by Arte Total. The various forms of expression that see the body as a place for artistic research and investigation thus assume a relevant position. We are governed by anti-discriminatory principles, and this implies an acute awareness of the world in which we live and the questioning of oppressive hegemonies.

It is within this freedom of thought and criticism of violence that we believe we can be more free, critical, tolerant and just people. After all, art is not only aesthetic, and aesthetics is also political. In the last two centuries, the sexualised body has gained an epistemological centrality never achieved before. Contemporary visual culture witnesses this process of affirmation of the sexes and their bodies, crossing borders and identities. In these intersections, the body-image is very present and it is in the historical course of the images of the sexed body of the politics of the gaze that the power relations and the creation of the “docile bodies”, of which Foucault speaks to us, are woven. It is docile “(…) a body which may be subjected, which may be used, which may be transformed and perfected” – Foucault (1999, p. 118). It was the ideia of regarding domination and the situation of the body that “enters a machinery of power that scours it, dismantles it and recomposes it”(p.117) that interested us, in a first approach, concerning this theme of the bearded woman. The first experiences of work and research took us to paths that were not at first programmed because, in the creative act, there is a considerable amount of randomness that rhizomatically leads us to the unknown. In these reflections, new questions and new researches emerged in order to “fill ourselves up” and manage to throw up some meaningful movement. In the working group, we started a diagnosis based on the POWER FLOWER tool. From there, some doubts and questions about the positioning of each element in the face of power mechanisms emerged. We then decided to read the book by Chimamanda Ngozi Adichie “to educate feminist children” (2017), because the issue of gender identity was discussed in the group and the issue of feminism came along. This reading was also important for the approach to the theme, in what concerns children and young people.. From this “filling” came another question: how to reflect on the relationship of the images (created in the show) and the audience.

Our search led us to the Robert Doisneau’s famous photograph, Un Regard Oblique. The photographer’s purpose was to explore the images considering the reactions of passers-by who, in their daily routine, passing by the window of an Art Gallery where two paintings were exhibited, one of which was a female nude by Wagner. According to Doane (1982), the couple’s play of glances captured by Doisneau’s hidden camera reveals how the female gaze is outside the triangle of meaning that organises the image: “The man is not in a central position; indeed, he occupies a very narrow space at the far right of the image. However, it is his gaze that defines the photograph’s problematic; it is his gaze that effectively erases that of the woman. In fact, as the subject of the gaze, the woman looks intently. But it is not only the object of her gaze that is hidden from the spectator, as her gaze is wrapped by two poles that define the axis of male vision. […] The fetishist representation of the naked female body, fully visible, guarantees a masculinization of the spectator’s position. […] The woman’s gaze is, literally, outside the triangle that traces a complicity between the man, the female nude, and the spectator” (Doane,1982, pp. 84-85). The question that came to us from this example was: and today? How do we relate to the body? How do we read Foucault? What mechanisms of power still resist and what mechanisms of power have entered our social DNA? How do we resist? Where does it hurt us? How can we act on our traumas? And the public? How will it situate itself in this work? Today, is the female gaze still situated outside the triangle of signification that organises Doisneau’s image? Regardless of a self-designation or not, the work CLEMENTINA ended up carrying a feminist poetics, aligning itself with an ethical, aesthetic and political stance of resistance and creation of other possible figurations for the feminine, for the body and for subjectivity. The development of the project started with a set of five creation laboratories, each lasting one month, aimed at children and young people, in parallel with the company’s creation work. Two performances were presented. The first one by the dance company Arte Total and the second one with the result of the laboratories’ work, where we included the participating children and young people, thus generating a feeling of presence and an internalisation of the concept launched at the starting point of the work. Thus, a participative choice was, also, more participative. The participation of a public composed by young children carried with it a vast eclectic set of public, which was an added value in the general objectives of the project. In other words: A feminist imaginary that materialized in a contemporary creation in which the active and passive participants, even without knowing it, were heirs of a feminist critical lineage that tried to overcome identity barriers and became present as an artistic project. Regarding the participation of the children, the intrinsic question to the work was to understand how it would be possible, through images, to become conscious of the body and to create movements capable of contextualizing voices that are often absent in dance experiences in the school context. Starting from this problematization was configured in a search for significant knowledge that seemed to us to constitute the different spaces of identity production.

*From the choreography CLEMENTINA, Cristina Mendanha presented the paper (whose micro-essay we publish now) and video with the same title, for the second edition of the Seminar on Visual Culture, on October 27th, at the University of Minho, in an organization by Passeio/CECS.