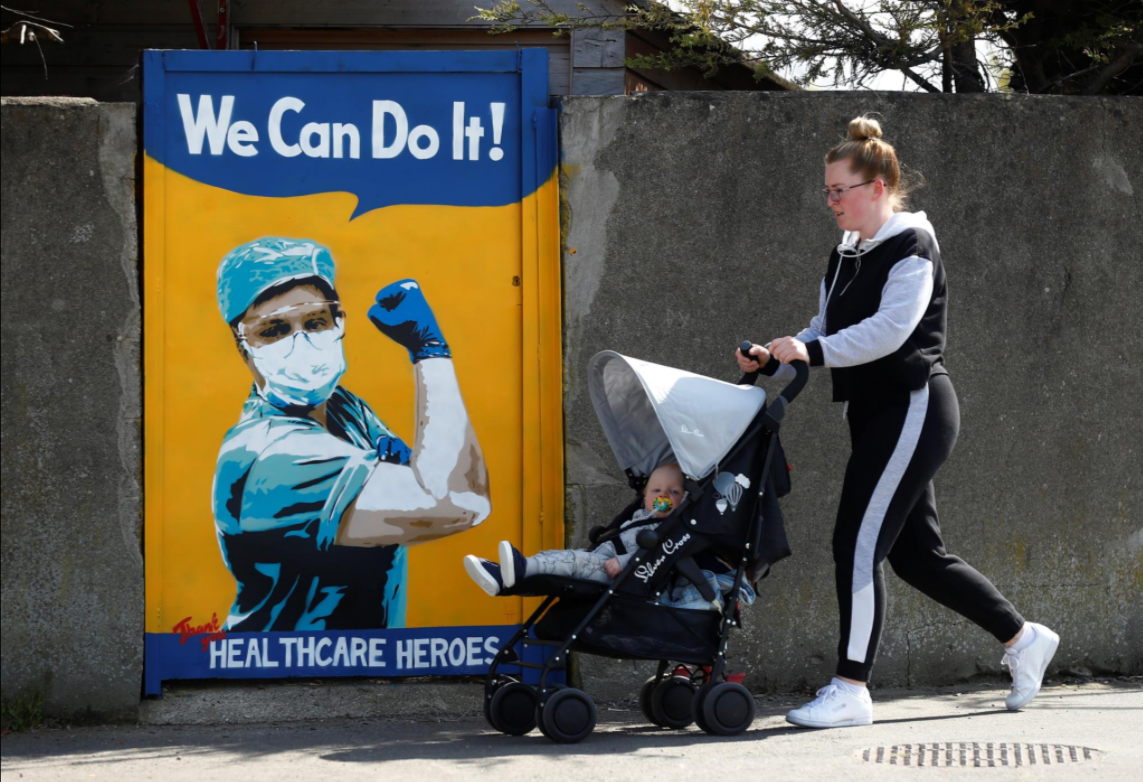 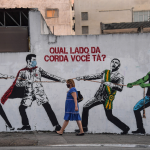 Covid-19 in the street art discourse

Discourse is a tool used in times of peace and in times of war. It involves verbal language, images, social actors, and a specific context (Paltridge, 2012). As usual, in periods of instability and crisis, some voices need to be heard and street artworks manifestations, of a popular and informal nature, are fundamental to their projection in public discourse. In this essay, we want to highlight the discourse produced by street art during the Covid-19 pandemic, an art form that is sometimes misunderstood and devalued, given the often illicit nature of this street intervention (Campos & Sequeira, 2018, p. 78).

As street art is a portrait of reality, the discourse that produces played an active role on the growth and development of the pandemic in the global context. Many artworks on the streets of cities developed this theme. This type of art is available for everyone and does not matter so much its creator, but rather the message you want to convey and/or the moment you want to mark.

For the present micro-essay, we chose two artworks that portray the pandemic situation in which we find ourselves through the use of image and written language. The speech examples we have selected are not given by a power group, but rather a representation of protest, or even resistance, to those powers. It is important to highlight that discourse does something since it is intentional. Through it, thus, social representations about certain subjects can be produced. The first artwork can be seen in Dublin, Ireland. This country has dealt, and continues to deal, soberly in combating the pandemic: like the rest of Europe, Ireland has already had a series of constraints and restrictive measures.

In this first example of street art, the importance of health professionals in the fight against the Covid-19 pandemic is highlighted. They are called heroes, as they are represented as under a huge sacrifice while fighting the virus. At the top of the image can be seen the following sentence: “We can do it”, to spread a message of hope and strength to the citizens of the country, as well as to the professionals who are on the front line. The health professional’s gesture and bright colours help to convey the hope that everything will be fine. The message aims to communicate the idea that it is possible to overcome this complicated period that we all live in. Besides, the artwork praises  the labour done by health professionals portraying them as heroes.

In the second figure, we can see an artwork related to a more specific situation: the management of the pandemic by the Brazilian government. It is possible to read the sentence: “Which side of the rope are you on?”. On the right side, Brazilian President Jair Bolsonaro is illustrated along with the image of the human-shaped virus, on the other side are two health professionals. Health professionals are represented as heroes once again. Including, one of them even has a cover, which refers to the imagery of comic book heroes. Jair Bolsonaro is portrayed as an assistant of the virus. The red colour of the letters increases the impact of the message. It aims to criticize the management of the covid crisis by Brazilian President Jair Bolsonaro, communicating the message that he is on the virus side and not on the side of health professionals. In this way, the artwork is a medium to raise awareness among the Brazilian people. We recall that Brazil was, and continues to be, one of the countries most affected by the pandemic, but one of those which adopted fewer measures to control the situation.

Comparing the two countries from which we chose the street artworks examples, we realized that, in Ireland, which has been showing rigidity in combating the pandemic, the message reflects a positive and reliable perspective. While in Brazil, the adopted message uncovers anger and discord, a context in which discontent is evident in the way the country’s government is dealing with Covid-19. The fact that the position of Minister of Health in Brazil has already been occupied by four different people since the beginning of the pandemic only further reveals the instability that the country is experiencing.

These choices reflect the position that the authors, in these cases street artists, have on the Covid-19 pandemic. It is easy to understand that the artists have great confidence in health professionals. Figure 1 reflects an optimistic attitude towards the fight against coronavirus, highlighting the crucial role of health professionals and all those who are at the frontline, as well as those who do their best in combat. We believe that the author of this artwork intended that those who visualize it were able to find an alternative meaning parallel to their reality. It is important to remember here that the iconic image “We can do it”, currently associated with the feminist movement, was produced as war propaganda in the United States in 1943. Which brings us to the question: did the author want to make an analogy between war and the Covid-19 pandemic? It is quite funny that at the moment this photograph was taken, a person without a mask is in the foreground. Did the photographer have an interest in seeing this antithesis represented? If the artist of this street art finds out a creative way to send a positive message, the photographer made us a question about our position in the real world.

In figure 2, it is obvious that the artist takes a position against the government authorities in Brazil. When producing the interrogation “Which side of the rope are you on?” it is clear that it disagrees with the measures or with how the pandemic outbreak in the country is being dealt with, thus declaring that Brazil is playing a power game between health professionals and government officials. The artist understood that these two large groups are not in the same position in the game and that it is for this reason that we, as ordinary citizens, have to choose the side we want to fight against. As in the previous example, the photographer framed the moment with a person in the middle of the rope. In this case, we can guess which side of the rope that person is going to push. This example of street art raises the viewers’ awareness that not everyone is always fighting for the best.

Comparing the two art pieces, we see that figure 1 calls for hope in difficult times, and for the strength that society needs to continue to “fight” in this “war”. In turn, the one reproduced in figure 2 asks the public about the role that each individual wants to perform in the pandemic. If, in one side, we have the strength and the hard work done by health professionals, who are compared to heroes, on the other side, we find the virus as a social actor and Bolsonaro as a target highly criticized for its position concerning it.

In both figure 1 and figure 2, the Covid-19 pandemic is represented as a battle. The creators of these two art pieces do not take a position of superiority. They remain in the same position as the public as it is a battle for everyone and decisions are impactful for the whole society. This reality is a strategy used by artists. Keeping all individuals at the same level, the call for empathy and safe attitudes in order not threaten the health of others, the accessible language use for easy perception, the comparisons made with war, and the attribution to health professionals of the role of soldiers as social actors in the battle that is going on, were some alternatives used by the creators to construct their artwork. Although created by different artists, in different countries, they portray the same situation and the purpose, in a way, is the same. Facing the pandemic as a battle and the importance of choosing which side we are on. The artists intend for people to reflect on this theme, since in this situation it is important to decide which side we are on and if, at times, we have doubts, “We can do it”, as figure 1 tells us.

The discursive strategies used to carry out the communicative functions designed by the artists are developed around an accessible language to be understood by the entire audience and thus reach more people. Both figures communicate specific knowledge – about the use of the mask – and represent the virus as if it were something palpable (Herrera, 2020). Both have the purpose of getting people to take a consistent attitude in choosing the best side, in this case, the side of protection and wearing a mask, and admit that the battle can be complicated, but that we are able to win as a team.

In conclusion, the political value of the discourse produced by these two figures is not less because they are street artworks. The creators of this street art did not act as individuals but in the name of a society that needed a collective voice in the face of changes during the pandemic. The discourse used in both examples is simple, yet full of implicit and impacting meanings that encourage reflection.