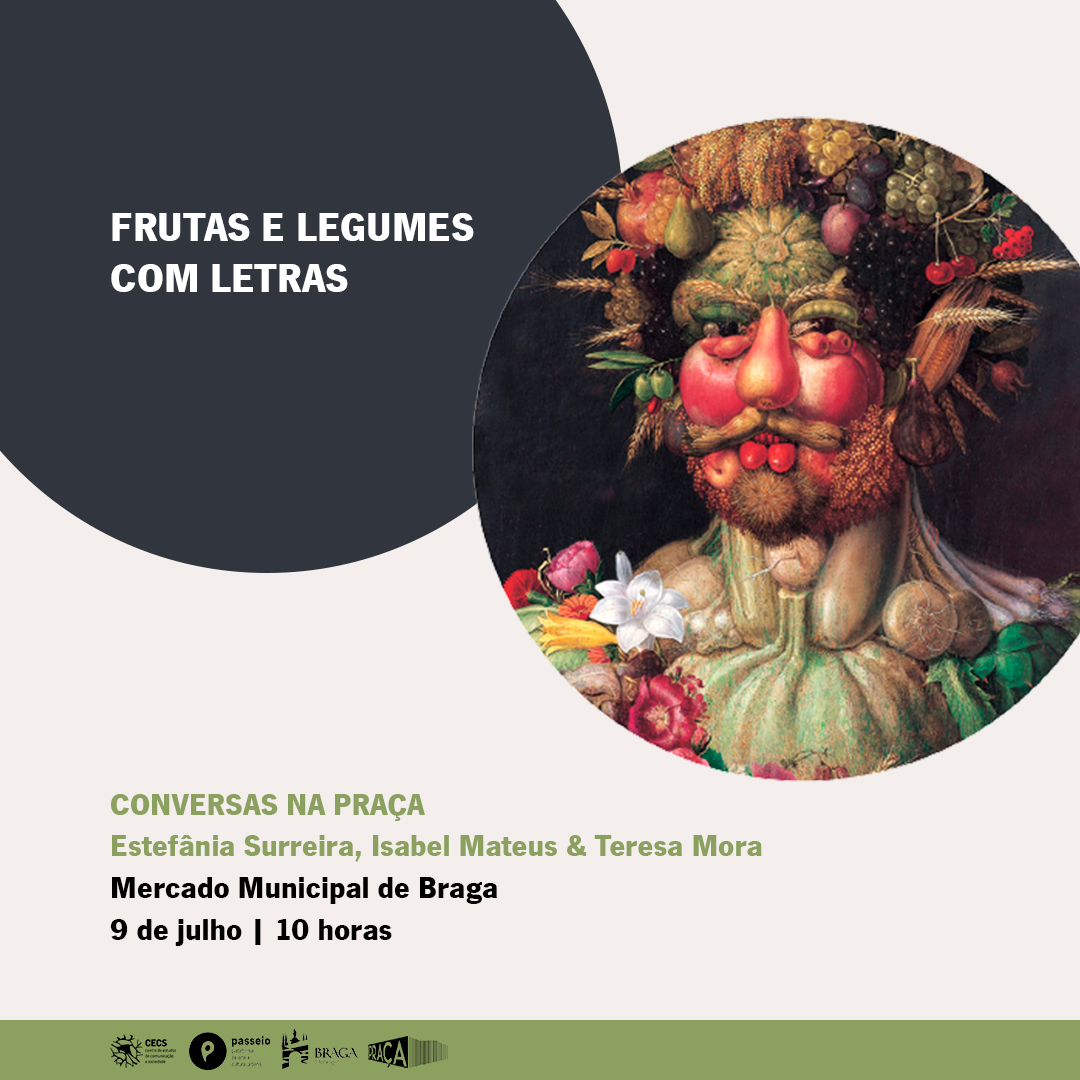 Upcoming | Fruits and Vegetables with Letters

Next Friday, July 9, at 10 am, next to the fountain of the Public Market of Braga, it will take place the second initiative of Conversas na Praça, entitled Frutas e Legumes com Letras (Fruits and Vegetables with Letters).

The public market of Braga, a Praça, is a place of exchange. We exchange material goods, and also exchange words, smiles, stories, knowledge, memories and affections. Inspired by the question What do the sellers in the Public Market of Braga have to teach and show us? Passeio’s team involved in the project COMPRAÇA has been registering the particularities of these daily exchanges, in deep collaboration with everyone involved. Part of our data includes popular verses, allusive to fruits and vegetables, known by the farmer-sellers that work in the market.

In this second conversation, Passeio proposes to give back the letters offered to us by the sellers in the market through a small staging, performed by Estefânia Surreira, storyteller, and readings of Portuguese literary passages (e.g. Cesário Verde, Ondina Braga, Sophia de Mello Breyner) allusive to fruits and vegetables, by Isabel Cristina Mateus, professor and researcher at the University of Minho.

Through these voices, we seek to stimulate possible dialogues between popular knowledge, the performing arts, and the experiences of public parkets in Portugal and in the world recorded in the Portuguese Literature.

The Conversas na Praça is an initiative of Passeio, within the scope of the research and intervention project COMPRAÇA. The cycle occurs in articulation with the Municipality of Braga.

Estefânia Surreira passionate about literature and illustration for children, became a storyteller and teacher of Portuguese and French in Elementary and Secondary Education. She has studied Lyric Singing since 1997 and regularly participates in singing and piano recitals. She is a member of the Early Music and Experimental Folie à Deux duo and is the vocalist of NyX, a fusion band between electronic music and opera singing. Furthermore, she had training in Theater Techniques, having been invited, in recent years, to participate in theater projects and several staged recitals of the Braga Poetry Union.

Isabel Cristina Mateus holds a degree in Modern Languages and Literature from the University of Coimbra and a Ph.D. in Literature Sciences (Portuguese Literature) from the University of Minho, where she works as Assistant Professor at the Institute of Arts and Human Sciences. She is a researcher at the Center for Humanistic Studies of this University and integrates the Identity and Intermediality Studies (Group 2i) and Poetics in the Portuguese Language. She is currently coordinator of Group2i and responsible for the Maria Ondina Braga project: Autobiography, Interculturality, and Life-Writing. She has (co)organized thematic volumes and is the author of several essays on Portuguese authors, published in specialized books and magazines, national and international.